On World Cancer Day 2020, Youth Cancer Europe was invited by the European Commission to be part of a major event to launch Europe’s Beating Cancer Plan.

Victor Gîrbu, a lawyer, young cancer survivor and ambassador for Youth Cancer Europe, was invited by the European Commissioner for Health and Food Safety, Stella Kyriakides to be one of the main speakers at the event, which took place at the European Parliament’s hemicycle in Brussels, Belgium. 26-year-old Gîrbu, a Romanian citizen and Bucharest resident who is originally from the Republic of Moldova, also had the chance to meet one-to-one with the Commissioner in the hours leading up to the event, in which the President of the European Commission, Ursula von der Leyen led the opening speech. 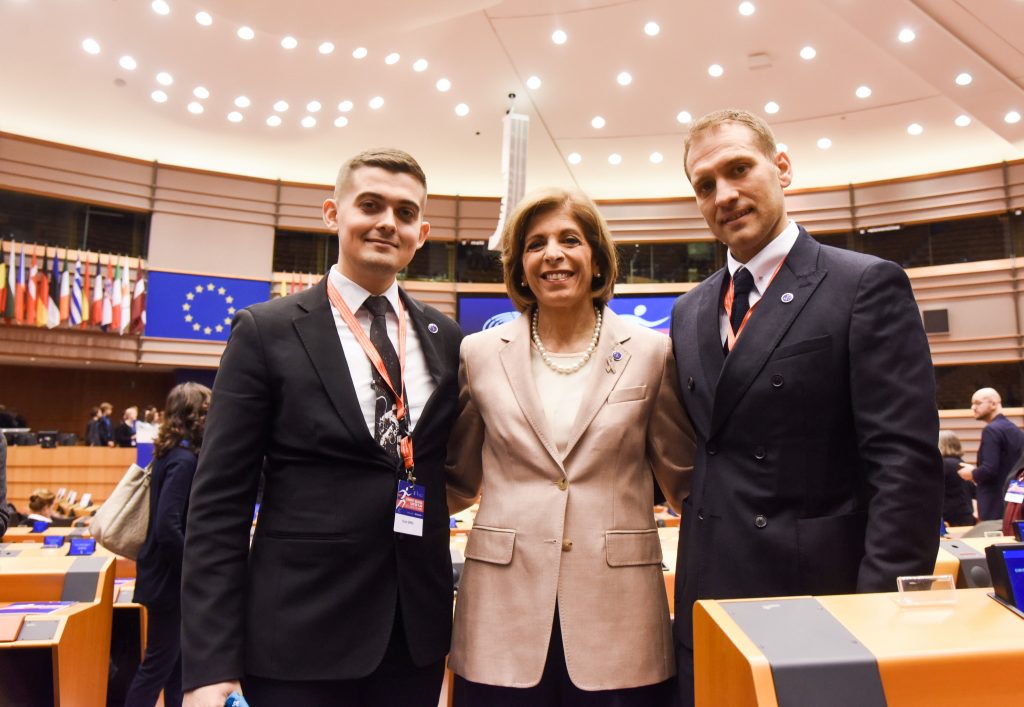 Gîrbu delivered a powerful and emotional speech in which he called on the EU to beat the disease “that stole my childhood”, receiving a standing ovation.

Cancer is the second leading cause of mortality after cardiovascular disease and places a huge burden on our health and social systems, putting pressure on governmental budgets and negatively impacting the productivity and growth of the economy, including a healthy workforce. It is also estimated that there’ll be a doubling of cancer cases by 2035 and that an estimated 40% of the population will face cancer at some point in their lives.

Despite these figures, 40% of all cancer cases can be prevented just by implementing what we already know about the disease today. This is why Youth Cancer Europe is part of the larger fight to make tackling cancer a fundamental part of Europe’s future. Europe’s Cancer Plan will propose actions at every key stage of the disease: prevention (lifestyle, pollution, vaccination), diagnosis, treatment and survivorship, looking to complement the existing national cancer plans of Member States. 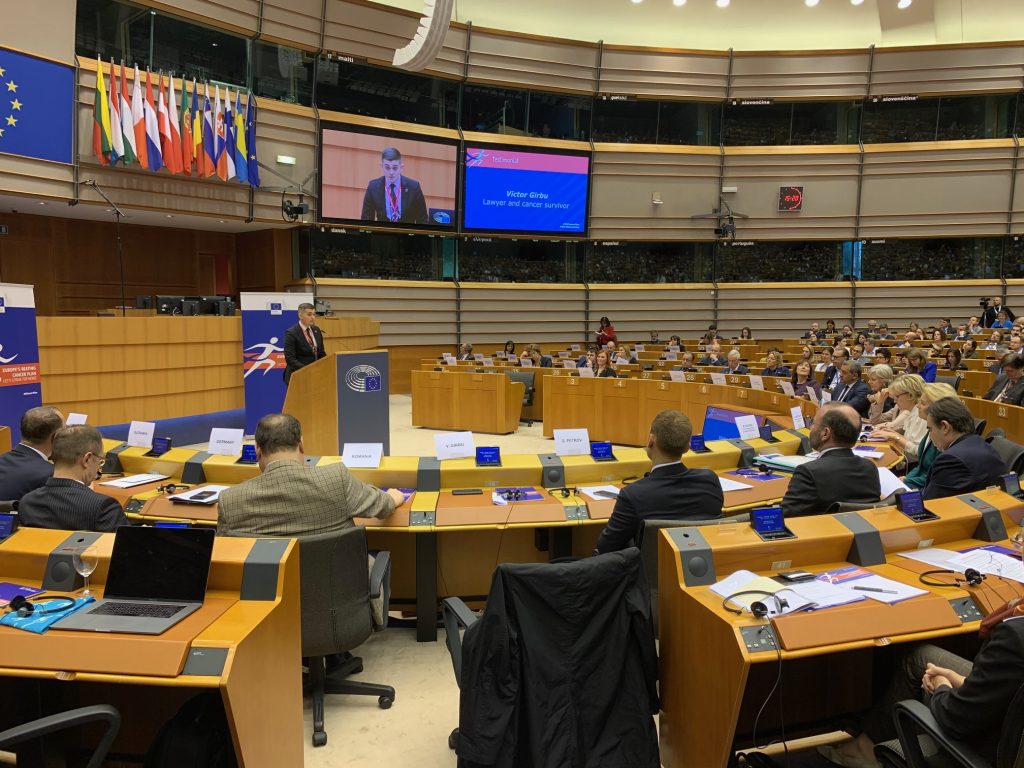 Victor Gîrbu was first diagnosed with Wilms’ Tumor at just six months of age, undergoing his first surgery a month later. His cancer battle continued until 2010, and today he’s able to live a normal life with approximately 70% of his left kidney. He is a lawyer and passionate cancer activist, having taken part in a number of events organised by Youth Cancer Europe around the continent.

Speaking at the event, Gîrbu said: “Patients are also lawyers, scientists, media specialists, economists and politicians. We can see the lacks and the needs, but we are motivated to offer solutions and help solve these problems. We don’t just sit back and wait for the officials to solve them for us and then criticise them if they fail; we offer our knowledge and expertise and commit to solve problems together. Europe is made up of some really smart people who also have first-hand experience of serious diseases, and if we call for anything, it is for closer collaboration with The Commission, stronger dialogue and a more honest recognition of the strength of the patient community.”

This is the third time that Youth Cancer Europe speaks at the European Parliament and the organisation’s first time in the hemicycle. The patient group launched its white paper at the same venue in 2018, in an event that revealed that cancer survivors across Europe receive harsher financial discrimination than convicted criminals. The event led to a wider conversation with MPs across a number of European countries as well as with the Association of British Insurers, which was hit by the scandal after two YCE members spoke about their own experience on BBC’s Victoria Derbyshire show. The second time was in last November, when the patient group hosted a roundtable discussion highlighting the flaws in the implementation of the European Union’s Cross Border Health Directive, an ambitious project that aims to provide European citizens with free public healthcare in any EU member state, but which 4 out of every 5 patients are not aware of. 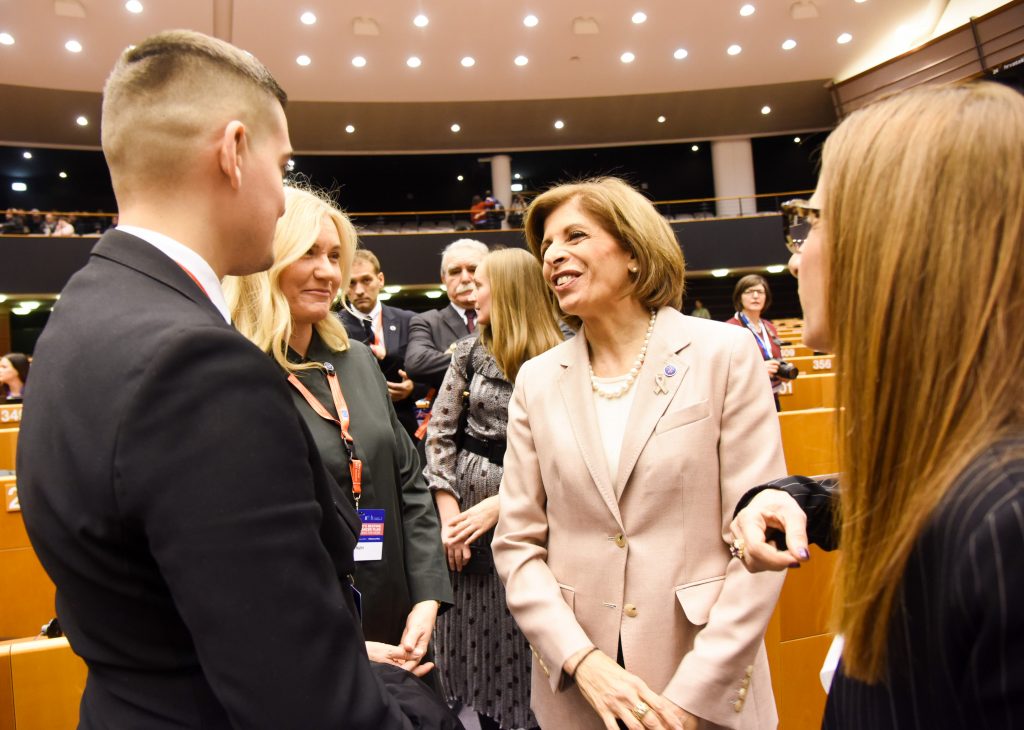