Message against cancer by the young survivors of the disease: Untold Festival, Cluj-Napoca [Article] 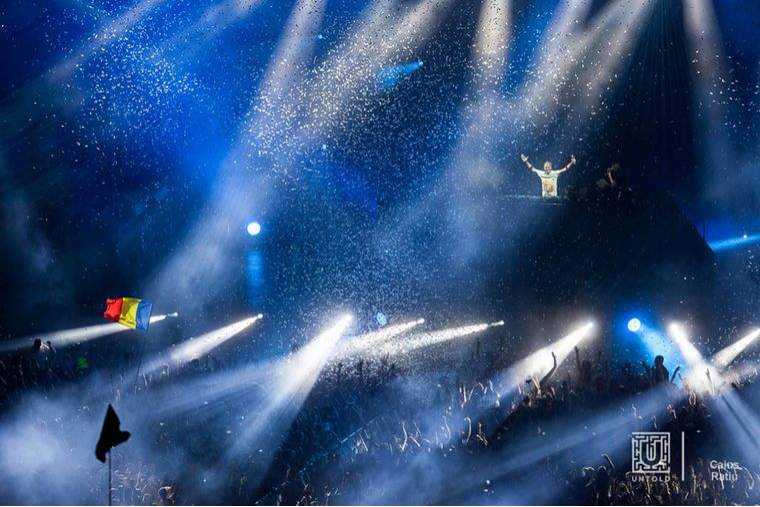 About 150 young cancer survivors from 10 European countries, including Romania, wore, Sunday evening at the Untold Festival from Cluj-Napoca, yellow shirts with a message against this illness, making a statement that there is life and hope after cancer.

The 150 young people arrived on Sunday at around 19.00 at the Cluj Arena in Cluj-Napoca, wearing yellow shirts with the message “Fuck Cancer” printed on them, planning to attend the performances taking place on the last evening of the Untold Festival, especially the one from David Guetta, Mediafax reported.

Katie Rizvi, founder of the Little People Association, told the journalists that the young people came to Cluj-Napoca to attend [a gathering with members of the Youth Cancer Europe community] and the Annual Summer Meeting for Young Cancer Survivors from Romania.

“From the 2nd to the 6th of August, the Little People Association will bring together in Cluj-Napoca 150 young cancer survivors from Romania and nine other European countries, including Poland, Slovenia, Belgium, Hungary and the Republic of Moldova, for the Annual Summer Meeting for Young Cancer Survivors from Romania, where the Youth Cancer Europe Advocacy Masterclass will also be held. The message on the shirts may seem controversial, but we don’t mean to offend anyone by it. At the same time, we are talking about young people who, when looking back at their lives and all the suffering they went through and yet trying to see it all in a positive light, that they are fighters in a battle with this terrible and cruel illness, sometimes would end up saying: “Fuck cancer” and they should be allowed to express themselves this way. They lost a few years fighting cancer, they went through chemotherapy and radiotherapy, and now they can say that they’re doing well, that there is life and hope after cancer, and that this disease can be defeated, “said Rizvi.

She also stated that the Masterclass is a training session specifically dedicated to young survivors of this disease being an important step for them in becoming ambassadors of all cancer survivors and in conveying an alternate message, a positive one.

“The young people will learn how to spread their message so that it reaches the general public and how to have the courage to share their experiences” said Rizvi.

Daniel Tomai, aged 22, is one of the participants at this event. When he was only 8 years old, he was diagnosed with acute lymphoblastic leukemia.

“I underwent one year of intensive therapy, chemotherapy, radiotherapy, and the disease went into remission. Now I am cured. It’s a terrible disease, and the hospitalization period was pretty rough, but I had a lot of self- confidence. When those around you hear that you have cancer, they already call the priests for the last rites. But our message is one of survival, that you can get over cancer and that your life can go on,” said Tomai, who is currently a student in the fourth year at the University of Medicine in Timisoara.

Oana Rusu, representative of the of the Little People Association in Cluj-Napoca, said that young cancer survivors should have an important contribution in presenting different disease cases, learning to develop their representation and networking skills, as well as their lobbying practices.

The young people attending the meeting are over 18 and they are survivors of various forms of child cancer, such as leukemia, melanoma and cerebral cancer.

Youth Cancer Europe is a European network with partners from 15 European countries, founded by the Little People Association. Some of the network’s priorities are the provision of age-appropriate and accessible treatments in Europe, long-term care and political and legal representation of young cancer patients.

The Annual Summer Meeting for Young Cancer Survivors from Romania will also host the General Assembly of the Temerarii Club, which was founded by the Little People Association in 2006. This club is a community of Romanian teenagers who beat cancer, with almost 400 members. The Temerarii Club became the largest active group of mutual support among adolescents and young adults affected by cancer, as well as one of the most active communities of its kind in Europe.

The Annual Summer Meeting of Young Cancer Survivors from Romania will take place as part of the project Cluj-Napoca 2015 – European Youth Capital.