Youth Cancer Europe have revealed today how a shocking majority of European citizens, including youth with cancer, are unaware of the Cross Border Healthcare Directive and Regulation on Coordination of Social Security Systems: two crucial documents that give EU citizens the right to receive life-saving treatment for free in any other Member State, paid by their own country of residence (as opposed to the host country). This means that patients are often left to find out about this crucial right by themselves, resulting in information being accessed inaccurately or once it’s too late.

The revelation was made this morning during a roundtable discussion, hosted by the youth-led cancer patient organisation at the European Parliament in Brussels. In attendance were an audience of MEPs and other key cancer stakeholders (including newly elected members of the MEPs Against Cancer group), along with members of Youth Cancer Europe who shared their own stories, highlighting how the system looks from the perspective of youth with cancer across the EU.

“Four out of five people living in the EU do not know how to access treatment abroad. The Directive was adopted more than eight years ago; the Regulation, 15 years ago. Yet Member States to date did little to equip their citizens with life-saving information. National Contact Points that should have become guiding beacons in this quest to access healthcare abroad have proved to work only on paper, helping a mere 200 thousand patients per year to receive treatment abroad. In the European Union there are 36 million people living with rare diseases, many of whom cannot get adequate treatment in their own country. Meanwhile, tens of thousands of young cancer patients are needlessly dying every year due to lack of information, not due to finances or lack of therapy options. If European authorities value the upcoming generation, they should start working on saving our lives”.

Amongst the speakers was Mariana Coutinho, a 26-year-old survivor who was diagnosed with a rare form of sarcoma of the liver (Epithelioid Hemangioendothelioma or EHE; a one in one million occurrence) in her native Portugal three years ago. Following a relapse shortly after her first surgery, which proved ineffective, she had to wait a staggering 8 months until her physician agreed to sign off the necessary paperwork for her to receive cutting-edge specialist treatment, known as “Nanoknife”, at a London hospital. Mariana needed the paperwork in order for the Portuguese health service to cover the cost of her treatment – and during the long wait, her tumour continued to grow. But the real shock to the audience came when Mariana revealed that she hadn’t been told about neither “Nanoknife” nor the EU legal acts which gave her the right to receive the treatment in the UK, covered by the Portugal; she found out about both while searching online for an alternative to yet another surgery.

“Despite efforts to make information available, only a minority of potential patients are aware of their rights in accessing Cross Border Healthcare. Only two out of ten EU citizens feel well informed on the matter, while only one in ten are actually aware about National Contact Points to begin with.” 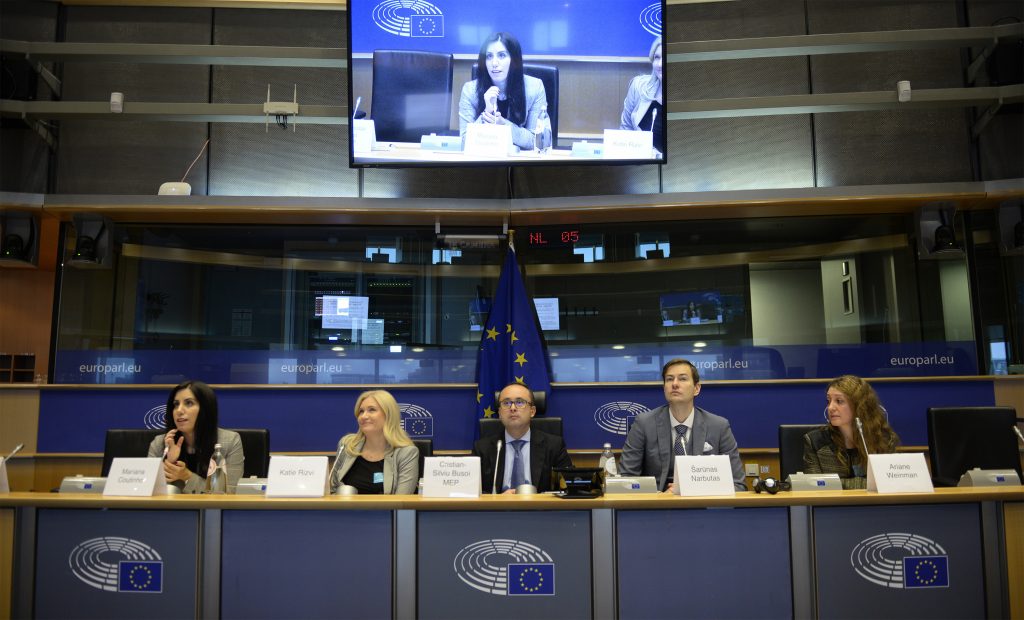 “Cross Border Health suffers from too many practical problems, exceptions, loopholes and grey areas.” He also stressed how the current Directive leaves patients in many countries “having to pay for their own treatments upfront”.

The event helped generate wide press coverage in Portugal (thanks to Mariana’s case study) and Romania. You can see the results in full detail here.

This is the second time that Youth Cancer Europe speaks at the European Parliament. Last year, the patient group launched its white paper at the same venue, in an event that revealed that cancer survivors across Europe receive harsher financial discrimination than convicted criminals. The event led to a wider conversation with Members of Parliament across a number of European countries as well as with the Association of British Insurers, which was hit by the scandal after two YCE members spoke about their own experience on BBC’s Victoria Derbyshire show.

A big thank-you goes out to our sponsors for making this event possible: